The neighbouring towns of Arén, to the north, and Benabarre to the south, are another attraction for visitors to the historic site of Montañana. Both places still have remains from the Middle Ages , together with other finds, such a dinosaur footprints,Furthermore, in Puente de Montañana , whose inhabitants now live next to the Noguera river in Ribagorza, and which is reached by a hanging bridge, there are also interesting examples of traditional Pyrenean architecture and the Plateresque entrance to the church.

The town centre was declared a Site of Historic and Artistic Interest, in recognition of how well later buildings had been integrated with the mediaeval ones. The most notable buildings are the remains of the castle, the church of San Martín, the chapel of San Gregorio and Santa Barbara, and the arcaded square.
However, Arén is especially famous as the “dinosaur town”, for the quantity and quality of the paleontological remains from 65 million years ago, close to the time of extinction, where a new species was found and called arenysaurus in honour of the town.

The Dinosaur Museum in Arén, in the former town hall. exhibits fossils from the digging sites and explains their discovery using dioramas, objects and audiovisuals. The visit ends with a look at the nearby site with fossils of ichnites (footprints), which has a viewing platform, and you can walk to the Blasi deposits, where there are replicas of the bones found.

Moreover, in the former house of the Governor, the La Ribagorza Information Centre explains the wealth and diversity of geological and natural features in the district. 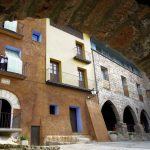 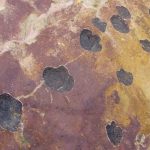 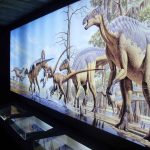 In the main square, with its arches and barbican, you find the town hall and the first in a long line of mansions stretching throughout the old town, such as the Casa Cambra, Casa Messoné, the hospital of Santa Elena, the convent of the Dominican Sisters, and the Discalced Augustinians. Streets and squares, arcades, doorways and passages make up a town that bears witness to its mediaeval past and historical importance.

The palace-castle of the counts of Ribagorza, which still has parts from the 11th-13th centuries, overlooks the whole town You can see things from the remains of a Moorish tower to a fusilier fort, a Gothic church and the old water cistern.

The Neo-classical church of Nuestra Señora de Valdeflores and San Miguel Arcángel also has a parish museum. The Gothic altarpiece of Santa Elena, the Romanesque carving of the Virgin of Linares, or the rich collection of goldwork, are some of the outstanding exhibits.

Apart from monument route, the Benabarre tourist office has information on several routes leading to various interesting places in the town. You can see the ice house, an oil mill, fountains, cheese factories and handmade chocolate…. 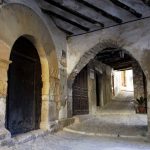 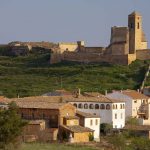 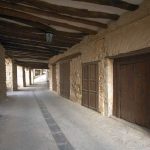